I love Toowoomba. It was my home town for many years and the location where I bought my first house. More importantly, Toowoomba was the first place where I would commute daily over 300kms to work in the DirtComp office, a place that harboured my passion for 4wds.

Getting back into the countryside for the day, leaving the bustle that is an inner suburb of Brisbane’s CDB and driving to a country town with a digestible pace was rewarding. Randall and I loaded up the DirtComp Landcruiser for a trip up the hill and with a pre-dawn start to the days commitments, we were quickly swapping suburban views for country vistas. The air was crisp as we hit the hay fields on the route out there and after we’d spent the days formalities inside the dyno room of Toowoomba’s Diesel Care, the extra reward for our time came in the form of the GSL Fabrication 79 Series V8 Diesel. 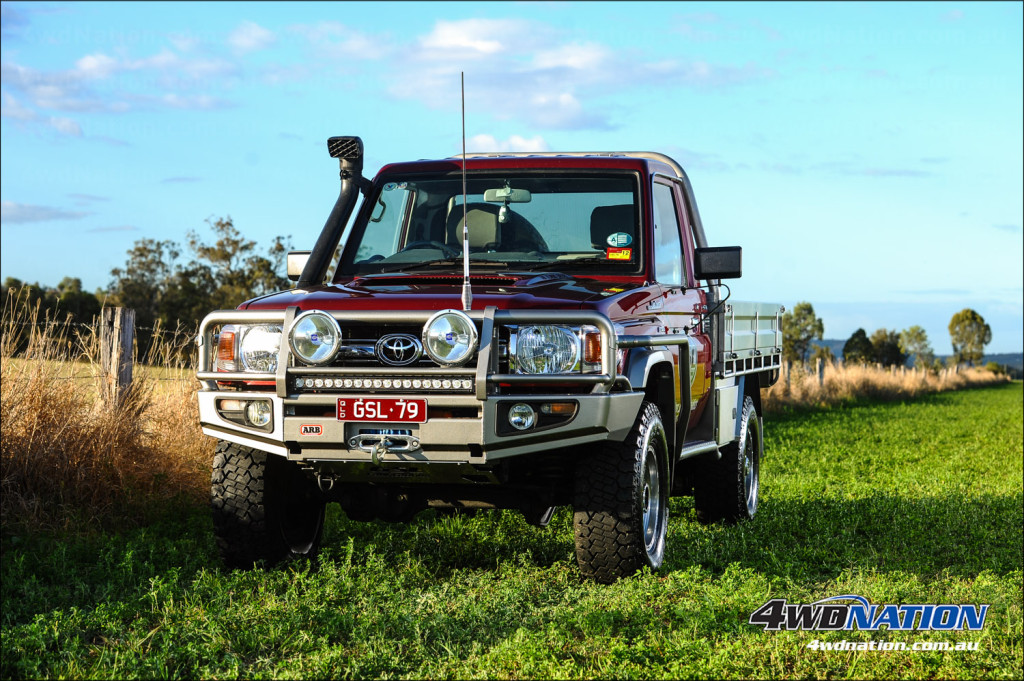 We were there to shoot pictures of another Landcruiser ute but this brand new red version caught our eye as it sat out in the carpark alone. In fact, it was more the subtle modifications that really captured our interest. After we’d done our necessary deeds in the dyno room, we loaded up our gear and took a trip down the escarpment to a small town called Grantham to get a better look at what was behind the glossy red paint. Grantham, a small rural town whose rise to fame also being during the rise of unforeseen flood waters that ripped through the Lockyer Valley in 2011. The small farming town with a railway bridge instantly became a national treasure and an icon of strength and agility as we all watched our TV’s as the townsfolk hung onto their roof tops and vehicle after vehicle was washed under the aged wooden uprights of the rail bridge. 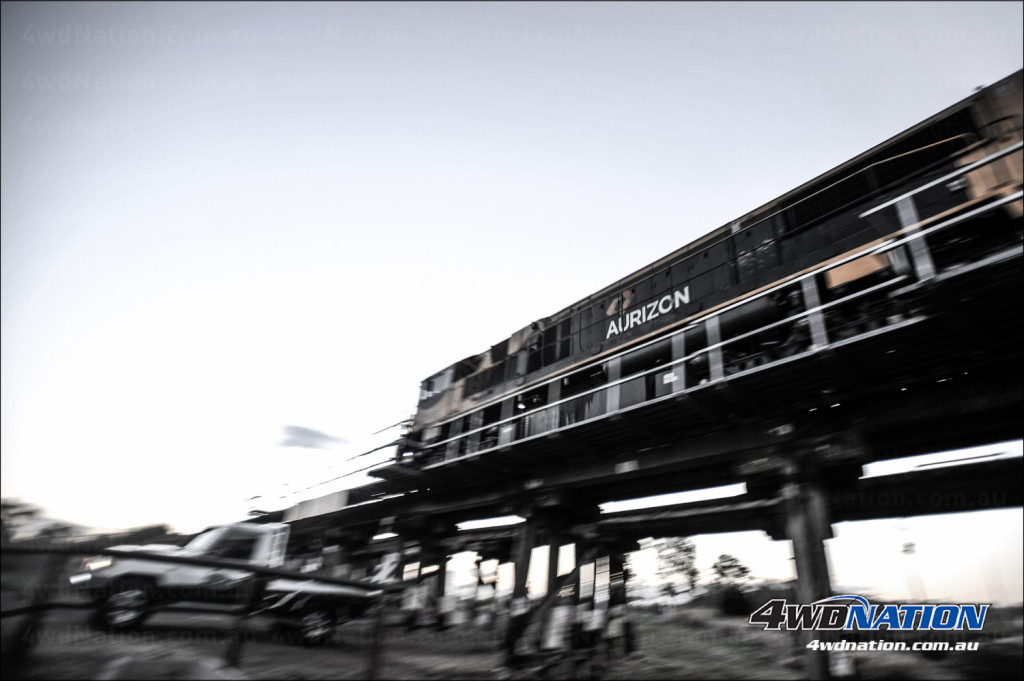 It was here, a stone’s throw away from the bridge that we found the GSL Fabrications workshop. Their workshop, with its 5 meter eves would’ve been completely consumed by raging waters back in 2011, their neighbor in fact only surviving after getting caught in an ebb and rising to the roof line as the waters swole around him.  We took a quick workshop tour of their premises and they showed us over their custom stainless steel work, their impressive collection of welding equipment and their stable of Landcruisers ready to be turned into research and development models. 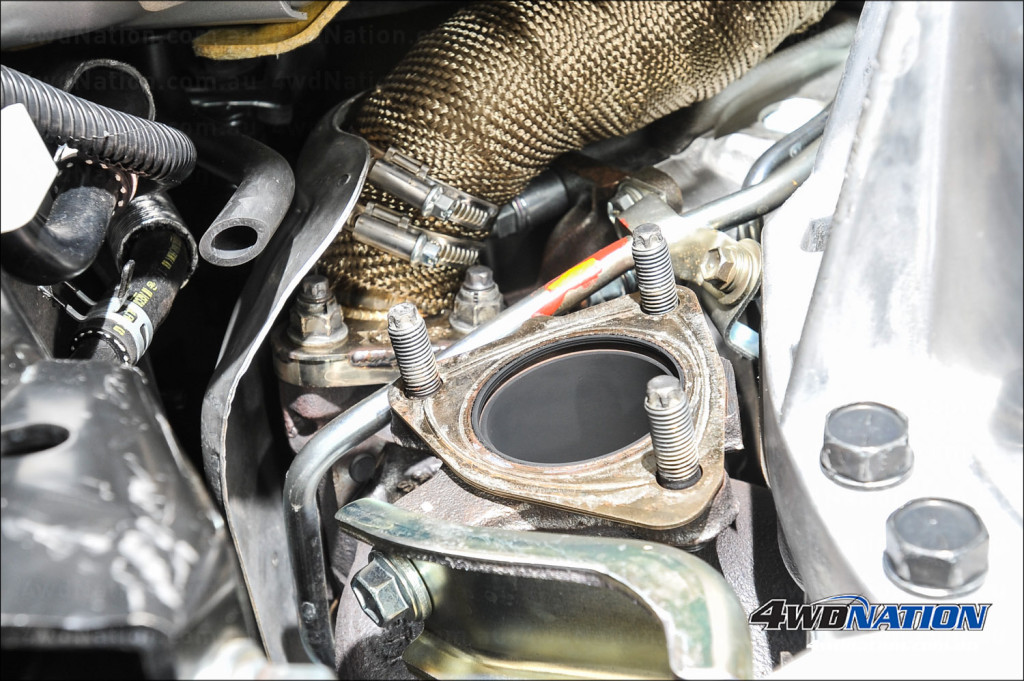 I am impressed to see the work they are doing to get better flow out of the Toyota V8 Diesel; the 2″ cross over pipes they are welding and fitting above the bellhousing are a work of art. 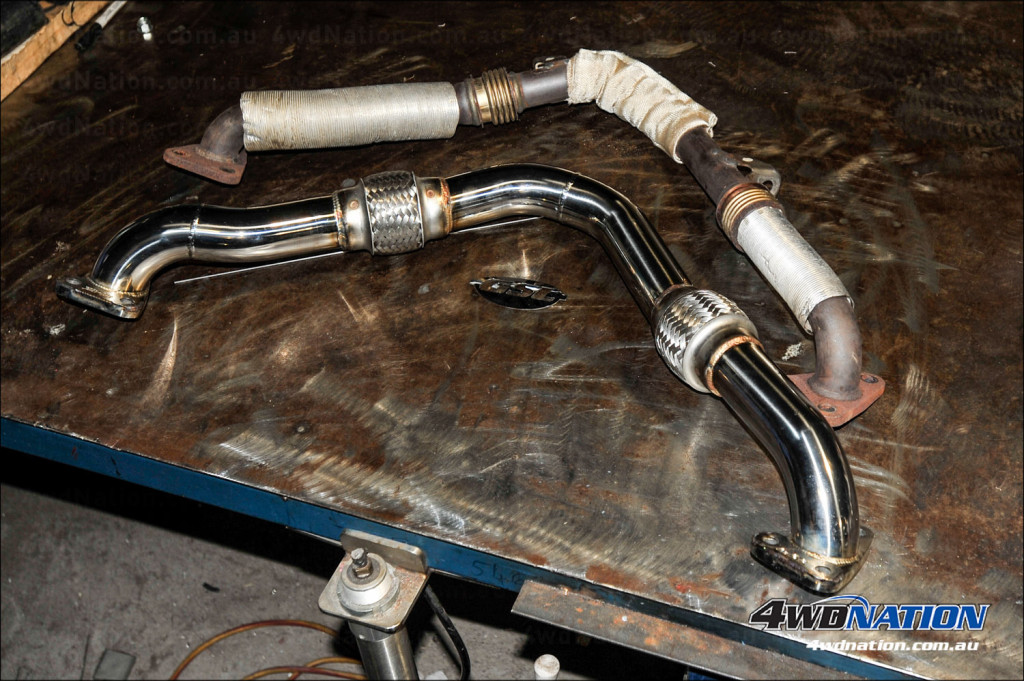 The red ute that we were about to look at further has this pipe installed and the gains in flow are unmistakable just on visual inspection when comparing it next to the factory pipe. The brothers involved with fabricating in the GSL guise are Luke and Scott. The two share a background in tig welding stainless steel for the dairy industry and with farming in their blood, we looked to the local surrounds for inspiration to shoot the details of the red ute. 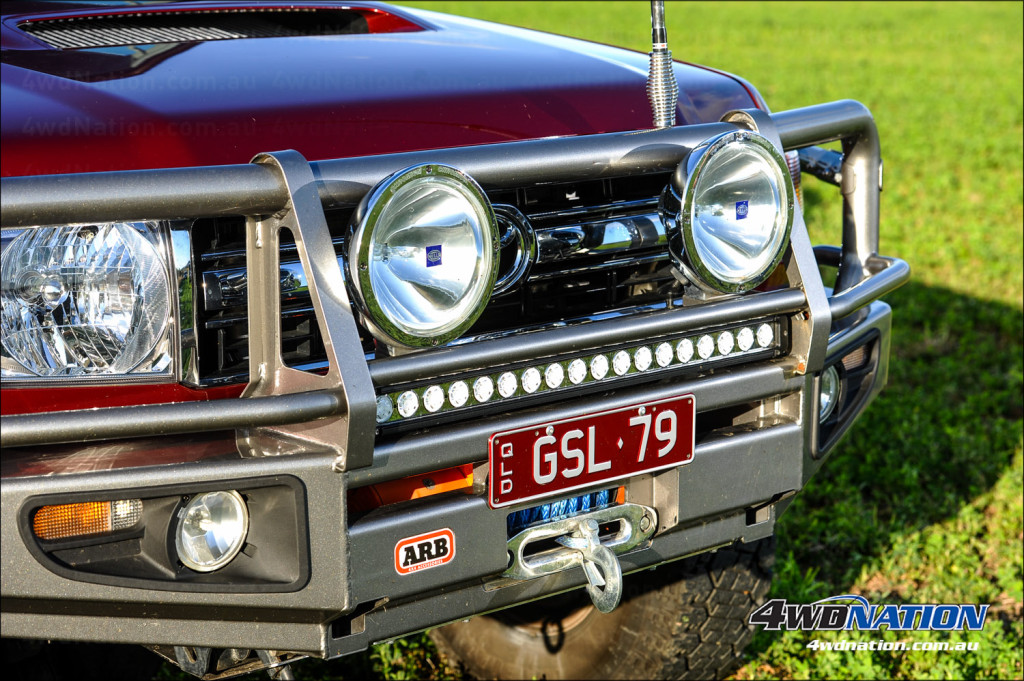 This vehicle will never take the award for the most modifications, or even the most power, what it is to me though, is an exercise in modifying well and for a function. Take the ARB bulbar for instance. Only once you look closely will you see that the top tube has been removed and replaced with a 50mm stand-in. Not only has this strengthened up the already stout bar, but it has offered an insurance over the front end protection when these brothers do what it is country dwellers do – use the vehicle far beyond it’s limitations. Also, while we focus on the front protection, you’ll notice that the central bar above the LED Lighbar has been raised. All in the name of fitting the lightbar where it looks better and is safer. The other modification apart to lighting on the front end is the 13,000 pound winch and the GSL bash plate which protects the lower curtain of the radiator. 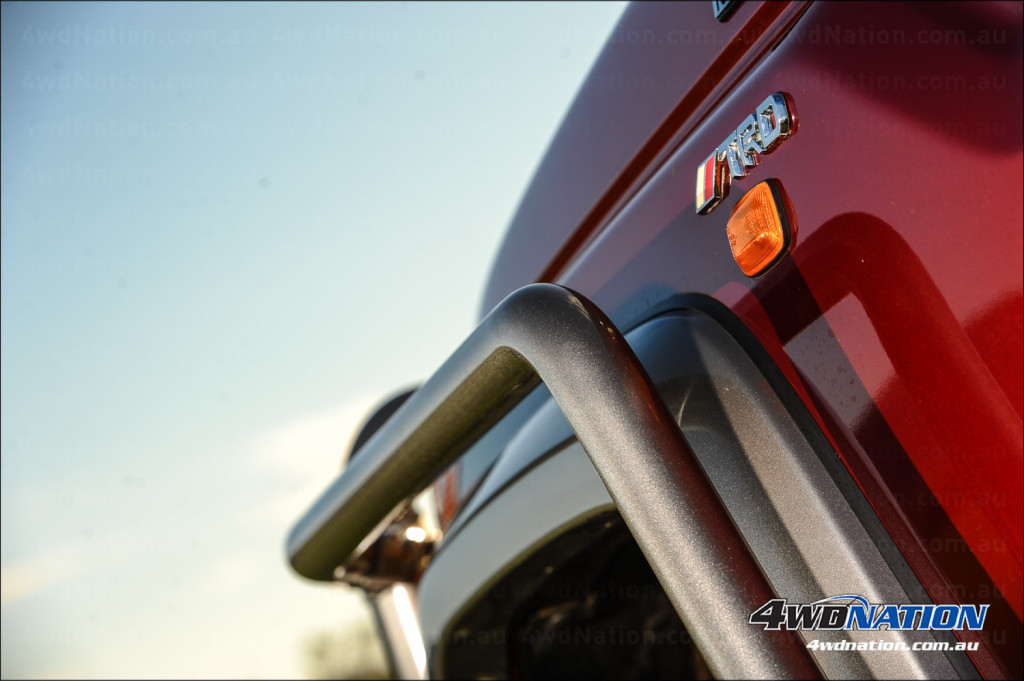 Notice the matching paint on the flares and the barwork – like I said, It’s the little things that set this Cruiser apart and round out a customized look. The brush bars on the ute were also altered for strength, the front portion receiving gussets and the rear end tying into the stainless steel tray.  Notice the TRD badge, wouldn’t it be neat if Toyota got one of these from the factory and tuned the 1VD-FTV to a new level. As it sits, the boys have removed the original spec intercooler and replaced it with an aftermarket HPD top mount. There is also a HKS Chip under the bonnet – it’s no cut snake but it’s a well oiled Diesel. 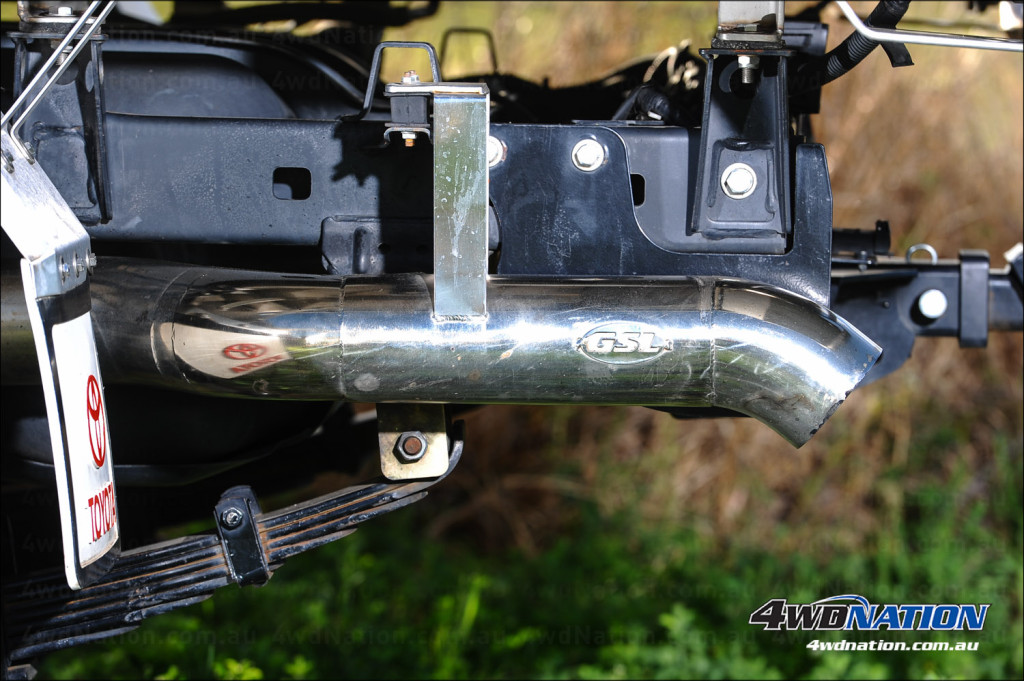 Performance wise, this wouldn’t be a GSL vehicle without a stainless steel exhaust system from tip to tail. The exhaust starts at the headers with the before mentioned 2″ crossover pipe running from the left hand exhaust bank. This then flows to a 5″ dump pipe off the factory turbo and down to a 5″ catalytic convertor. From there, the rest of the system is made up of 4″ mandrel bends and a 4″ stainless muffler to meet the 92dB ADR regulations. 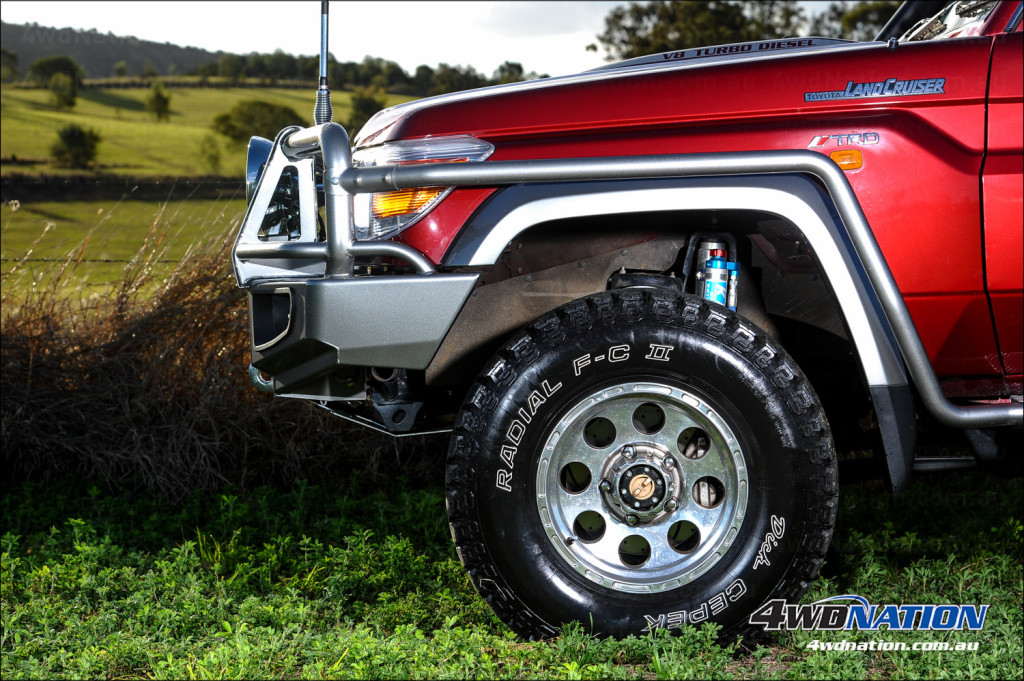 Rolling stock is provided by a set of polished Allied Thunders and the tyres of choice are Dick Cepek 33″ F-C II’s. This ute only ever gets used for daily driving, shooting and staking up the beach. The 33″ tyres are ample for their needs and being a relatively quiet all-terrain, are the prefect compromise between bitumen and dirt. The other thing of nore in this picture is the suspension. Those in the know will know that the blue and red anodizing like that can only mean one thing – this Cruiser ute rides like a King. 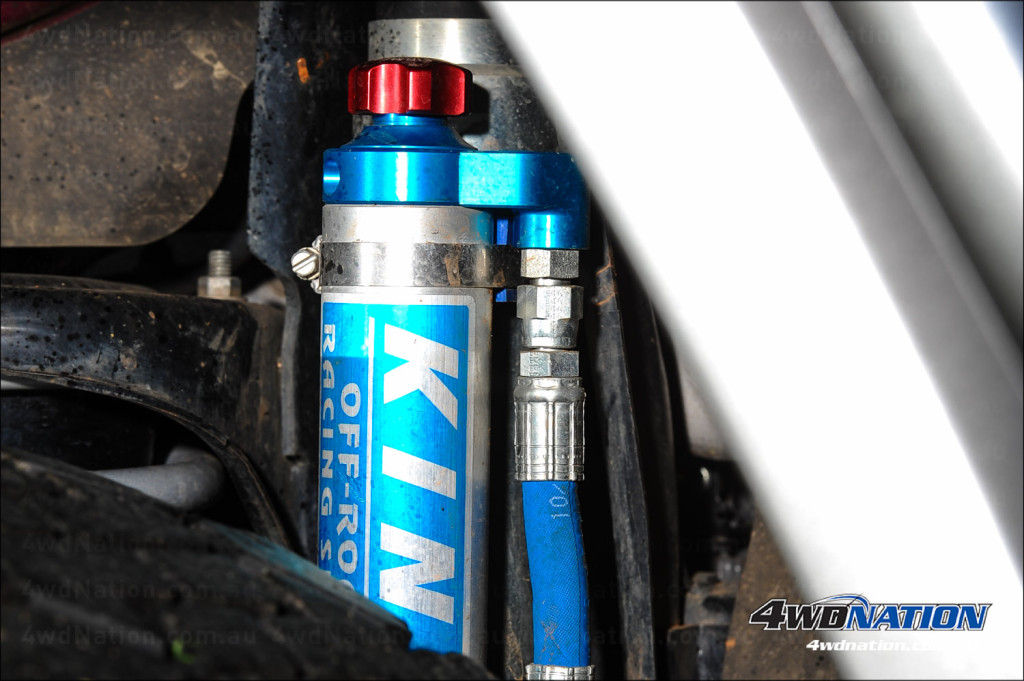 The 6063 hard anodized bodies and caps of the King Shocks are the icing on the cake of this immaculately presented ute. The fact that the brothers have taken the steps to improve the ride of the vehicle and the choice of suspension is a testimony to the craftsmanship they achieve and strive for on not only their vehicles but also their clients. 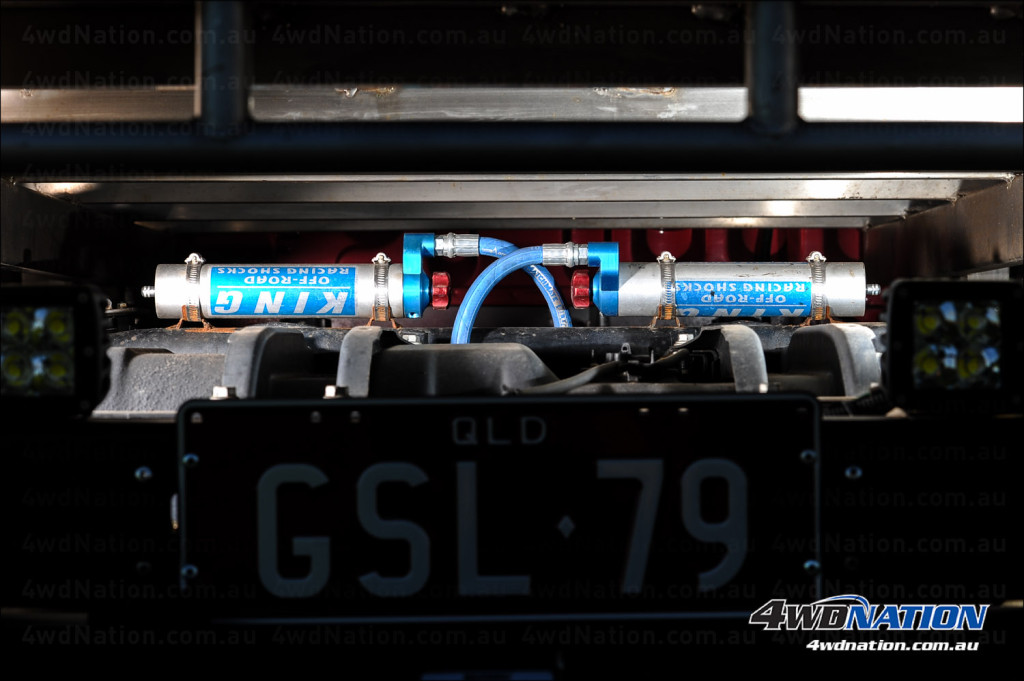 With adjustable ride quality front and rear, the King Offroad kit is what the brothers need to dial the ride in whether they are driving up the range, hitting the soft sand on Inskip Point of chasing a wild boar across a melon-holed field. 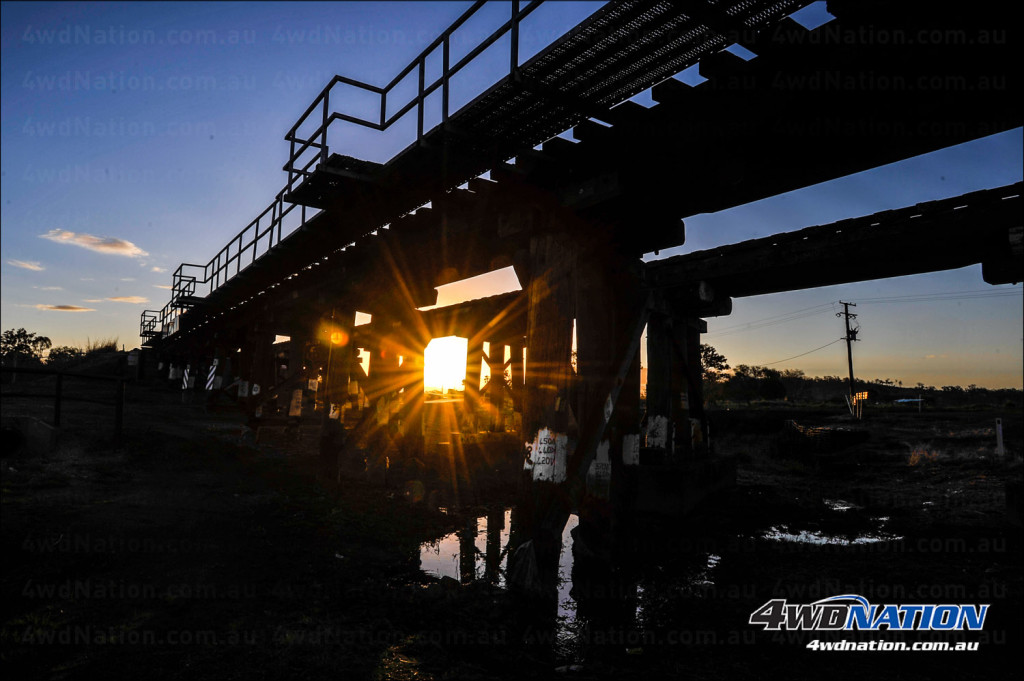 As the sun set on our venture into the fields of Grantham, I could only think how great it was to see this simple but well executed Toyota and to take you on the journey through it’s conception. We started out the chilly winters morning on the hunt for one of the most powerful Diesel utes in it’s dyno room enclosure and walked away with the joy of shooting it’s beautiful sister on the hay plains of the restored Grantham valley.

As a closing thought, it’s not always the heavily modified vehicles that grab your attention. Modest execution can be worthy of finding out its story and I guess it wasn’t just the red ute that captured my attention, it was the location of the workshop that built it and the love of all things V8 Diesel that captivate the two brothers in charge of building both utes to rise up over adversity and re-build their business after a devastating flood.

The full article on the HP hunting White ute is in the current edition of Dirtcomp Magazine. You can pick it up in your local newsagent or buy it online through our magazine shop.